When Algeria was French… 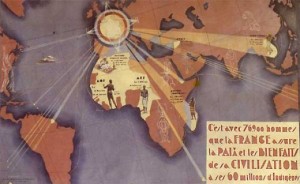 The “First French Empire” operated from the 17th century to 1814, when most of it was lost.

At the height of the Second Empire, the French were present:

In America: Small part of Canada, part of the Caribbean, Guiana

In Africa: a third of the continent

In India: several counties such as Pondicherry

In the Indian ocean: several islands such as Madagascar, Réunion

In the Pacific ocean: several islands such as French Polynesia

-To develop trade and prestige

-To spread French culture and language

-To spread the Catholic religion

In 1840, the French government offers Europe the possibility to populate Algeria.

As well as France of course, people come from Spain, Italy, Germany, Switzerland etc. It’s a real melting pot! They all live together and get along well! They all feel French! They all speak French with a different accent!

There is a general sense of happiness, peace, freedom. People speak of Algeria as Heaven on Earth.

The European colons and the following generations become known as the “pieds noirs” (black feet) and mainly live close to the coast, as you can see on this picture.

There are three main zones:

Oran counts a lot of Spaniards as it is only 200 km away from Spain (see map above). One person out of two is Spanish!

Alger is mainly populated by French (from France) people.

But in general, Algeria is the country of tolerance with so many different nationalities and religions happily living together!

Well, almost. The Arabs do not share the same rights as everyone else and even though some are happy with the French presence, some feel more and more like subhumans and decide to get rid of the French who have been there for almost one century and a half.

Who are the different parties?

-The French Army with 400,000 men, planes, helicopters, paratroopers, and the best soldiers.

-The FLN (Front de Libération Nationale) with pretty much nothing that announced a success. However they were determined, ready to fight, and not afraid to die. Their goal was to have as many Algerians as possible on their side. The ones who refused to support the FLN were killed.

-The Harki were Algerian natives who fought on the French side. There were 240,000 of them.

Years of fight sunk Algeria into chaos, panic, and terror. The “pieds noirs” left massively for France where lots of them had never even been before! One million of them, one of the biggest exodus of history!

Algeria celebrates its independence in July 1962. The French flags are quickly replaced by Algerian ones.

Do you know a famous “pied noir”?

Yes you do! Albert Camus was born in 1913 in Dréan, near Tunisia and grew up with his mother in Alger.

During French Truly’s last French Story Platform, we watched “Le Havre” http://www.youtube.com and used this beautiful and inspiring story to discuss and explore French Colonialism, its origin, its consequences, its reality.

We had a wonderful time with the whole Harbour Pointe Coffeehouse to ourselves, sat in comfy couches and big chairs, eating cheese, drinking wine, sharing our ideas, impressions, and thoughts!

Join us next time!