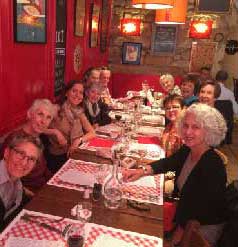 That’s it! We have just finished our glorious Trip to Lyon! We truly had an amazing time with a wonderful little group of 10 and the weather was perfect! Couldn’t ask for more!

I collected great pictures that I’d love to share with you, would you like to see what we did? I’ll show you the first part of the tour this week and the second part next week, so you get to enjoy the variety and richness of everything we did and what a pleasant time we had.

Did you know that Lyon was the second biggest city of France?

That it was the capital of gastronomy surrounded with the Beaujolais wine region north and the Côtes du Rhône wine region south?

That it used to be a capital of the Roman Empire?

That it is where French King François I decided to start the silk industry in 1536 after bringing it from northern Italy?

I could keep going but I want you to get to the pictures!

We spent half of our time in Lyon and the other half we used to explore surrounding areas via mini day trips: the Beaujolais, Vienne, Pérouges, the Côtes-Rôties, the national park called Pilat.

Scroll down for a day by day virtual visit! Enjoy! And if you wish you could have been there with us I have good news for you… we’re going again next spring. Click HERE for more info.

We all met at our Appart’ Hôtel in the lovely Lyon neighborhood called Lumière. An appart’ hôtel means that you enjoy a little studio with a kitchenette (fridge, table, chairs, stove, dishes) instead of just a hotel room. 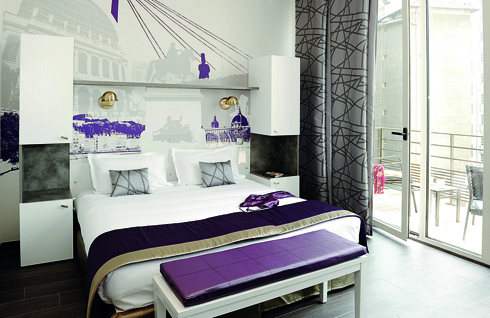 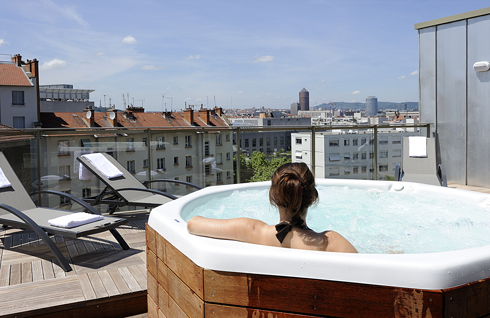 After a croissant, pain au chocolat, and brioche breakfast at the local café, how to best start a visit in Lyon than to venture all the way to the top of a hill to be able to enjoy a panoramic view, a real size map, of Lyon? So we took le funiculaire to go all the way up to Fourvière, admired the view and wondered around inside the stunning Basilica. We then walked all the way down through a zig zag rose garden and crossed the river Saône to arrive in Place Bellecour, one of the biggest squares in the whole of Europe. We packed a gorgeous little lunch at Pignol, the most renowned traiteur of Lyon, and off to le Parc de la Tête d’Or where we ate our pique-nique! 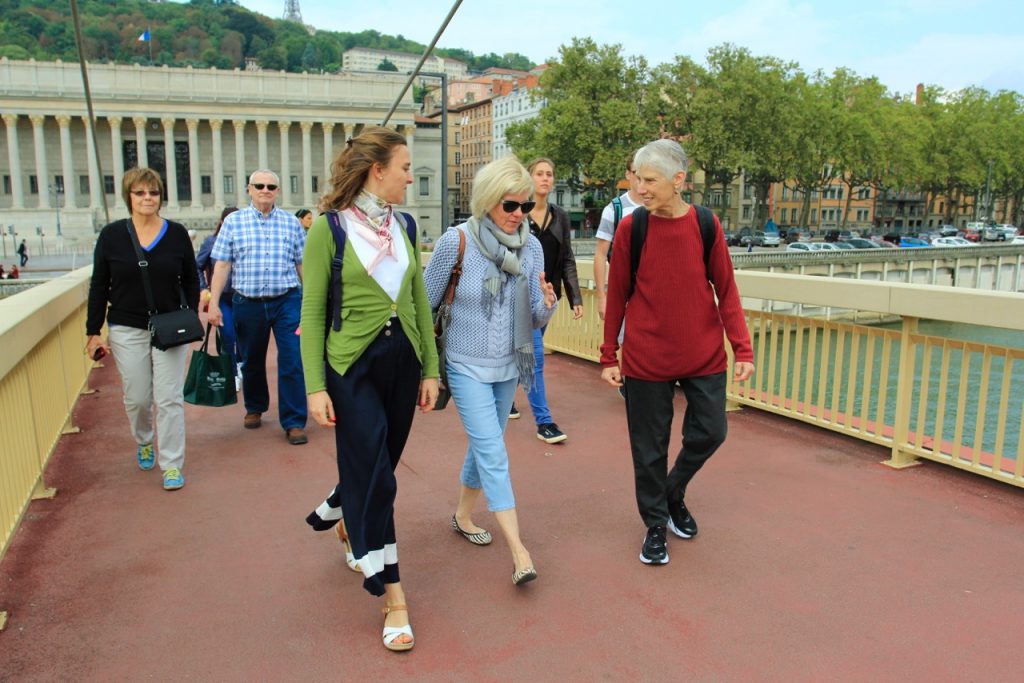 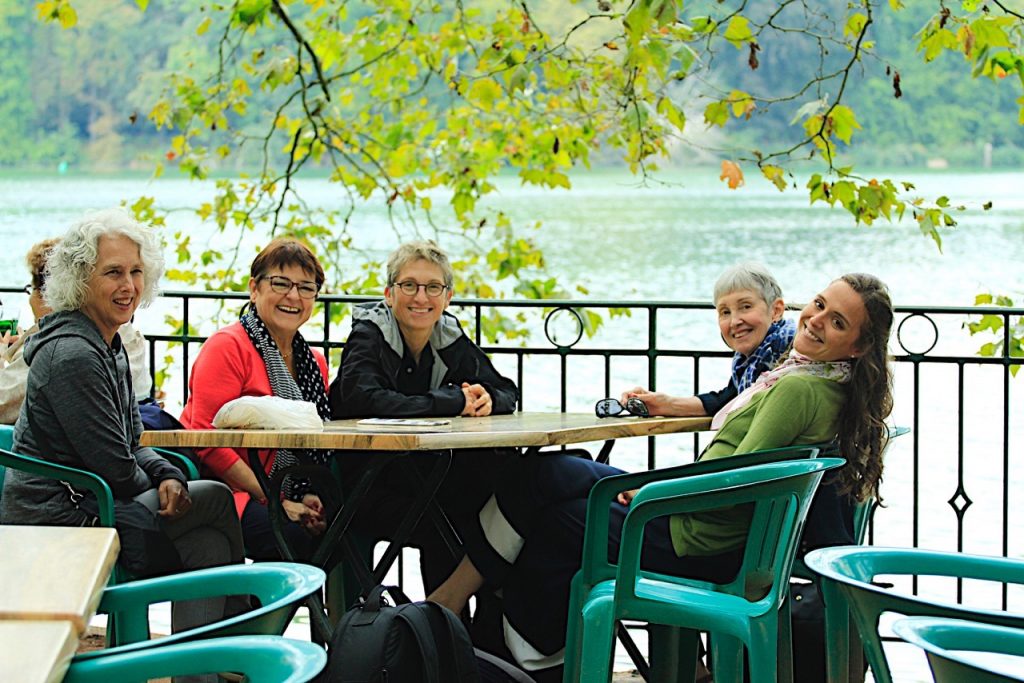 Silk: we saw the 16th century house that welcomed the silk industry in Lyon. The French King François I, responsible for bringing the Renaissance from Italy to France, decided to introduce the Silk Industry in France and he chose Lyon.

First we visited the Soierie Saint Georges, which holds a workshop in the back and a store in the front. You would never guess what goes on in there! It’s a father & son team who mostly work with old French castles & museums. Crème de la crème quality work. To give you an example, Romain, the son, showed us a silk velvet roll he was in the process of weaving, 100 meters (328 feet) long yet a simple design. It’s a 3 year project because they can only weave about 2 inches per day! They were asked by the Château de Versailles to restore Marie-Antoinette’s room, it took 20 years!

In the afternoon we went to CathAm… Jacques is an Art History Professor and…? He and the boss, his beautiful wife Catherine, also design stunning and iridescent 100% raw silk scarves. He explained to us how the idea came to him, how their family company was born, the origin of the silk, and the different ways to wear all of their various items! We all played a lot with the magical colors you can just about guess on this picture! 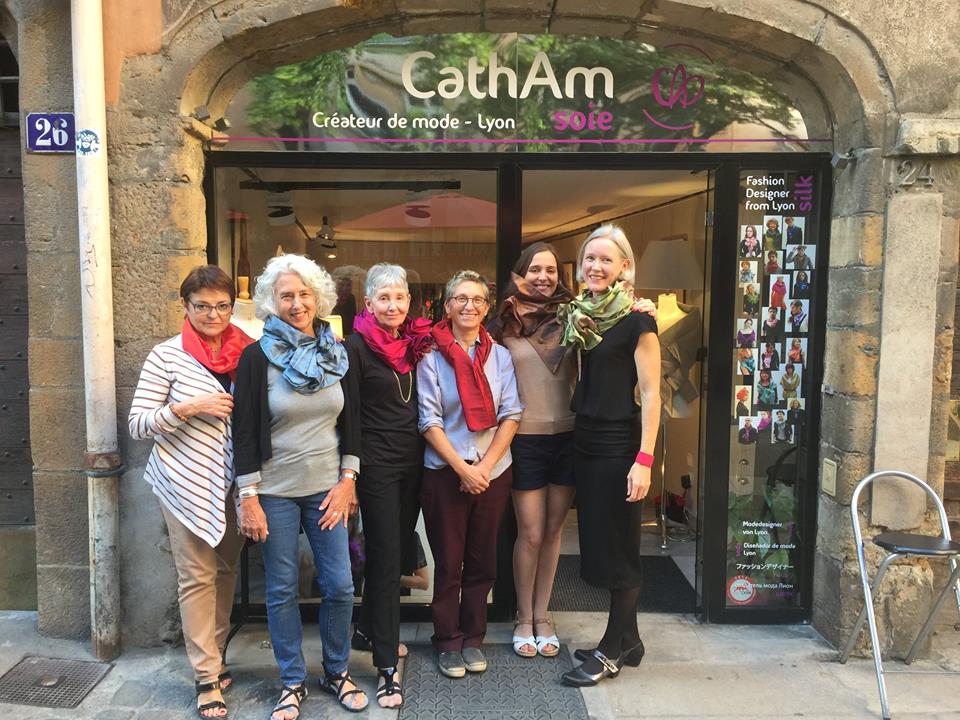 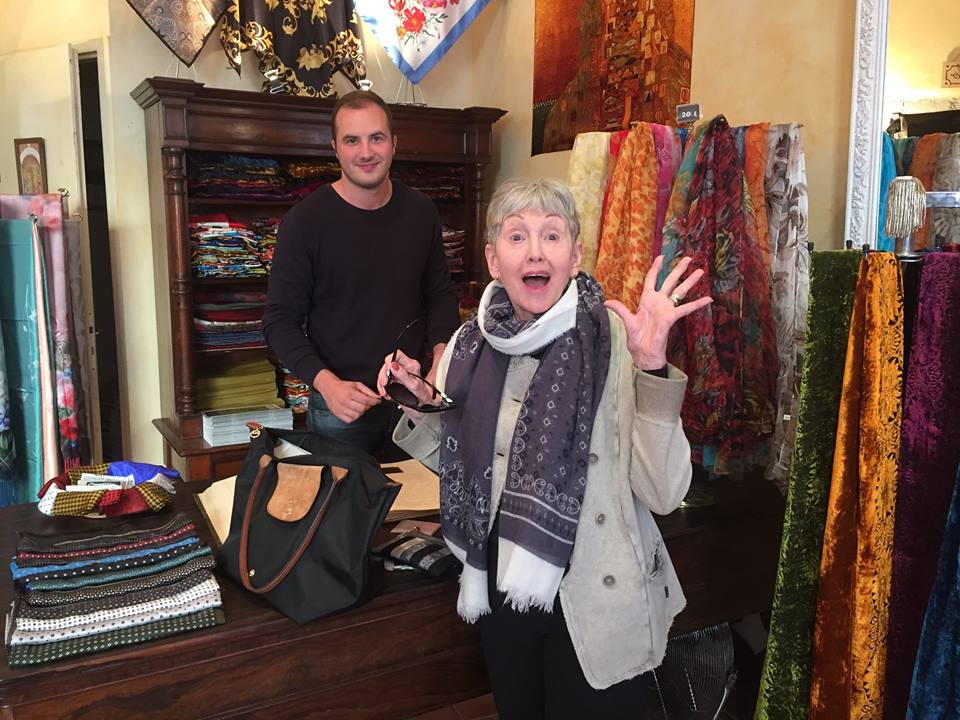 Architecture: why is this neighborhood called Old Lyon? Because in this neighborhood, you can see Roman, medieval, and Renaissance architecture. They all blend together beautifully.a perfect mix of Roman theater, medieval and renaissance churches, cathedral, and houses with the famous “traboules”, secret passages that take you inside buildings to end up in a completely different street!

A traboule has several purposes:
1- Only one set of stairs for 2 or more buildings is useful in tiny medieval streets because we gain a lot of space.
2- Clever shortcuts to get from one street to another super fast.
3- Bad weather protection for people but mostly for the silk!

And it’s gorgeous! And that’s another perfectly valid purpose! 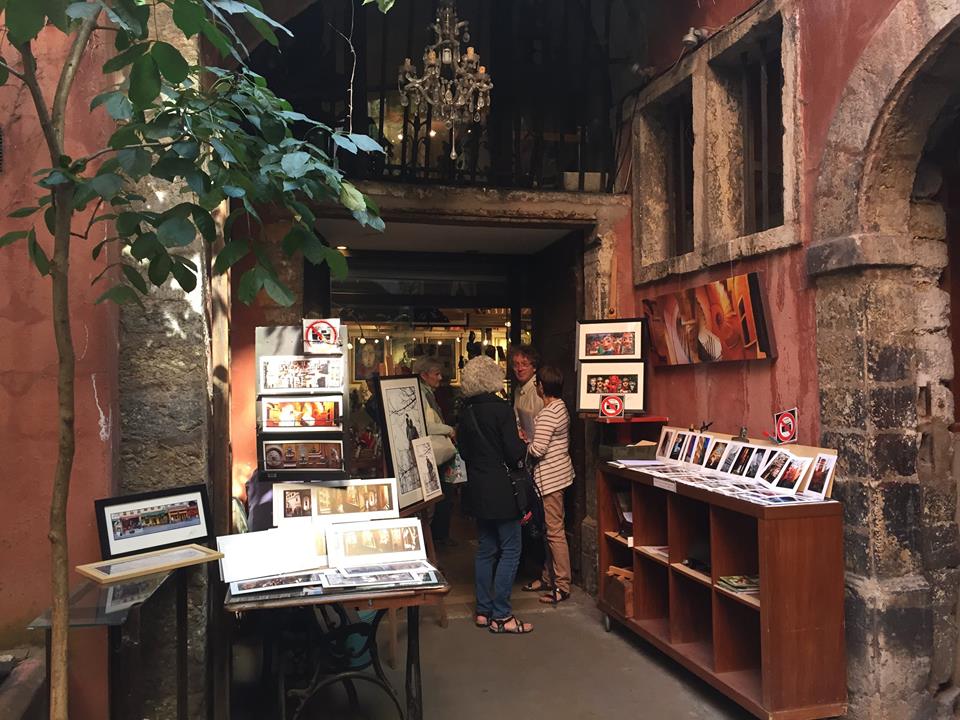 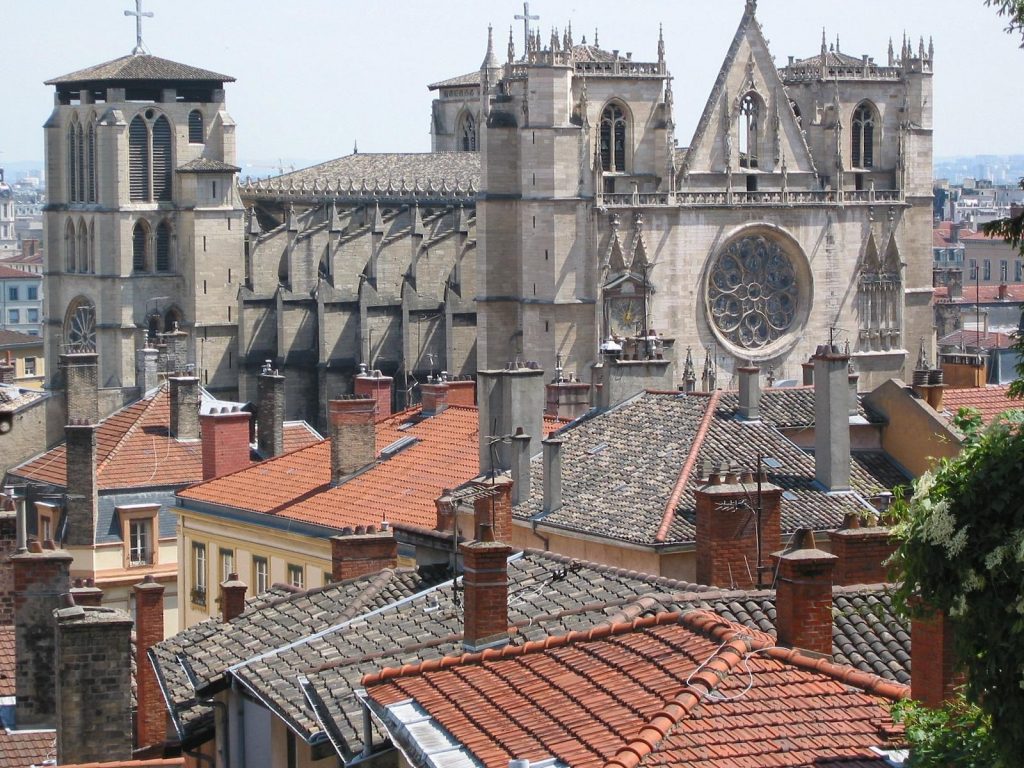 Gastronomy: Lyon is the International Capital of Gastronomy! Pas mal! That’s because the food is gorgeous, simple yet high quality ingredients, affordable & convivial. The perfect illustration of typical traditional Lyon is the bouchons lyonnais and the Vieux Lyon is full of it! Bon appétit! Off to discover le Beaujolais, stunning wine region situated in the north of Lyon. Our private chauffeur Georges picked us up outside our hotel and took us to medieval villages made with Pierres Dorées. Why golden stones? Because the limestone presence in the soil gives a warm shiny golden glow to all local houses! We enjoyed a delicious home made and home grown lunch at Chez Marlies in the old fortress village called Oingt, one of the “plus beaux villages de France”, walked around its charming tiny golden streets, and visited its wonderful local artists. 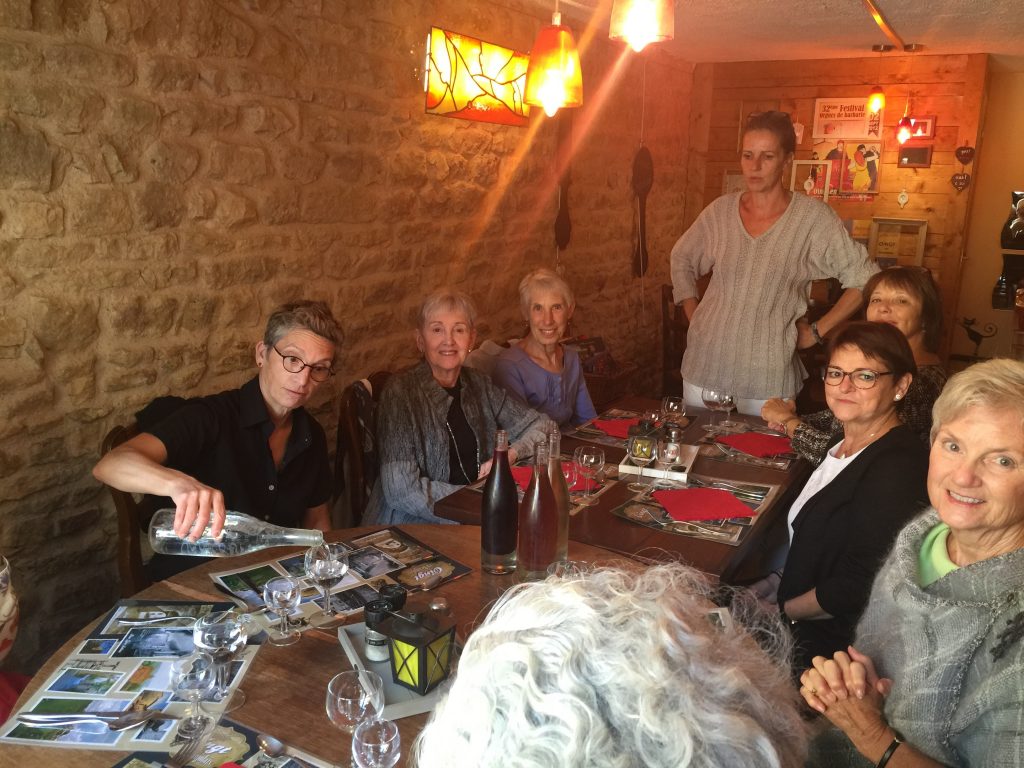 After les Pierres Dorées, we quickly stopped on a Cluny site where 10th century monks settled, before heading to le Château de la Chaize where we tasted 3 different kinds of Brouilly and explored their stunning mini Versailles Château, garden à la française, and vegetable garden. Why mini Versailles? Because the owner François de la Chaize had the fortunate help of Mansard & Le Nôtre, architects of Versailles… pas mal!!! The gardens are simply heavenly and make you forget time even exists. I want to go back! 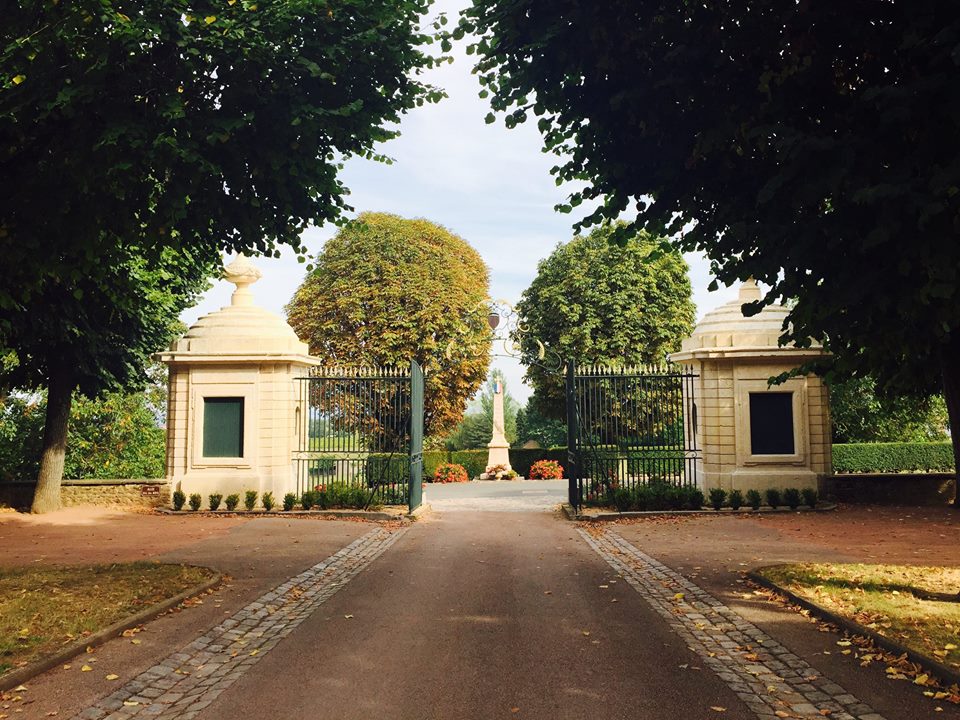 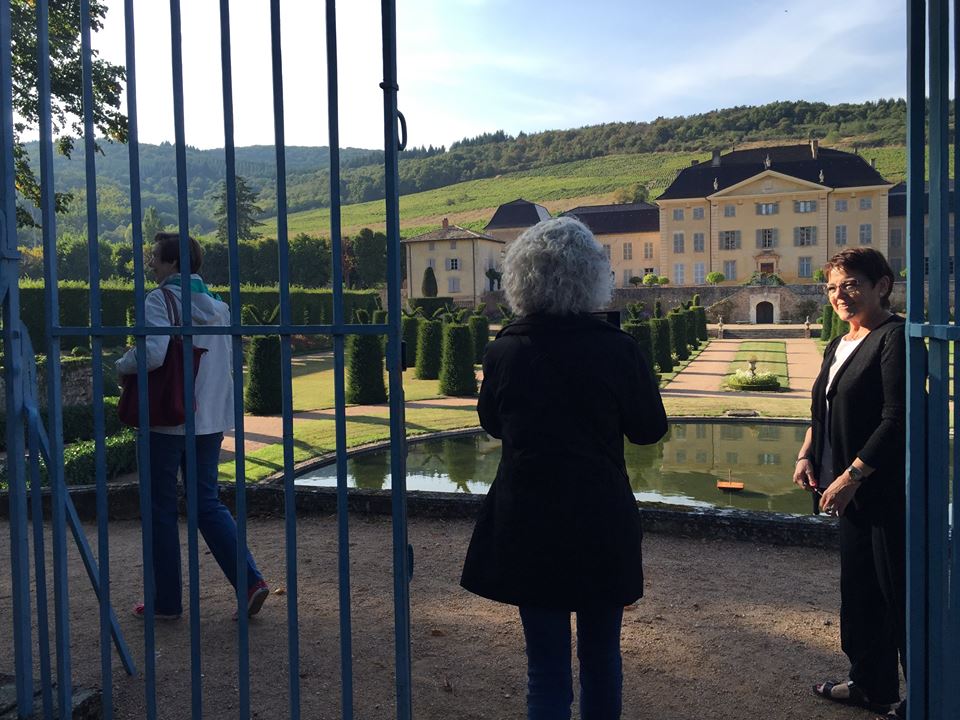 Today in Vienne, ancient capital of the Roman Empire! We took the train from Lyon and started exploring on one side of the river Rhône: café & viennoiseries, walked to the Mont Pipet to enjoy the best panoramic views of Vienne, admired the Roman theater, walked through the Cybèle (Greek goddess) ruins garden, had lunch in front of the Temple d’Auguste & de Livie, and then did a quick jump in time to see the Cathédrale Maurice! After admiring and walking through Roman sites during the morning & lunch, we headed to the exquisite Musée gallo-romain across the Rhône river where our guide Véronique (wearing the blue top) was waiting for us. She accompanied us through mosaics, model reproductions, amphores, tools, furniture, homes, streets, shops… even latrines! How extraordinary was this people! It always upsets me so much to study all the wonderful inventions of the Romans to then think how backwards the world went after them with 1000 years of Middle Ages. Next week you will see the pictures for the second half of our wonderful trip: Lyon, Pérouges, Boat trip, Côtes du Rhône winery, National Park… you will see!