It seems to me this should be the most famous French Love Affair! But it isn’t. So that’s why I decided to talk about it!

Today, I am bringing you a passionate love affair of 2 top intellectuals from the 18th century but I will focus on the woman to restore some justice in this world.

I know you know him.

I bet you don’t know her.

I bet after this video you’ll want to know everything about this very impressive woman.

Imagine 18th century France, right before the explosion of the 1789 French Revolution.

Today I’m going to change this for you and introduce you to one of the greatest geniuses of the 18th century and yes you have guessed, she was a woman.

Every Francophile knows Voltaire, the witty philosopher who mocked the Establishment and dreamt of freedom, but who knows about the great love of his life Émilie du Châtelet?? Let me tell you that if Émilie had been a man, her name might sound more familiar than Voltaire’s!

You need to read this book called Passionate Minds by David Bodanis. It is wonderful and so fun to read too!

Here are 4 facts that will make you want to buy this book:

1-As a girl Émilie outdid all her teachers so she ended up having to fight to acquire books so she could teach herself very complicated mathematics and physics.

2-She ended number 6 in the competition of the year organized by the Academy of Sciences in Paris. You might think number 6 isn’t so good but you need to know 2 things: Her ideas and calculations were too advanced for the men of the Académie des Sciences to truly grasp. She was a woman.

They were both outstandingly intelligent people, however, he admitted that he couldn’t create anything of value if he didn’t have her support, love, and respect.

If you love this French Love themed video, stay tuned because next week I’ll teach you 7 French expressions around love and of course you can join our 2 French events on February 19th and February 26th. 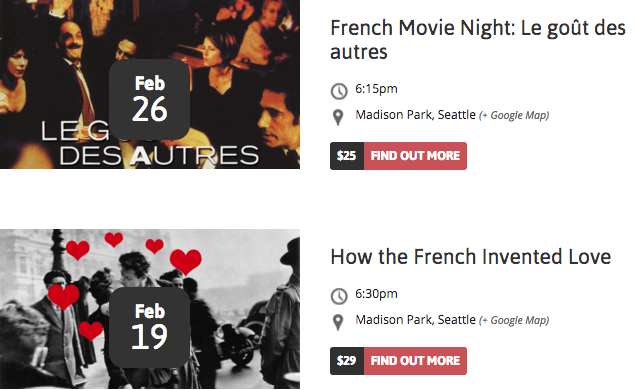 Merci, bisous, et à bientôt! Now go buy the book!  I promise you you will love it!