Thomas Jefferson in My Home Town

Today I am bringing a French special guest… ma maman!

She’s in Seattle for 2 weeks so of course she must be part of French Truly TV. For 2 reasons.

1- She lives in Vienne, a little Roman city next to Lyon

2- She is organizing and guiding the trips to Lyon and surroundings with me and Vienne is part of our journey.

So today, my maman and I are going to show you how Thomas Jefferson visiting our little Roman city Vienne changed the face of the US.

Vienne was a really important spot when it became part of the Roman Empire in 45 BC. Still today there are many monuments proving this grand past.

One of our favorites is Le Temple d’Auguste et de Livie. Why is it our favorite? It had a crazy and very unlikely life evolution!

It is built around 20 BC to celebrate Auguste (Augustus) the first Roman Emperor and Livie his wife.

After the fall of the Roman Empire in the 5th century, it becomes a Christian Church!

Until… la Revolution française of course, which hated the Church and decided to bring it down, democracy was to replace theocracy!

In 1792, churches are closed down and a revolutionary club from Vienne takes over. The Roman Temple becomes le Temple de la Raison!

Which brings me to my initial remark…

A few years before the French Revolution, Thomas Jefferson accompanied US Diplomat and Francophile Benjamin Franklin in his French travels. Guess where Jefferson stopped? Vienne! Et oui! He particularly loved the Temple d’Auguste et de Livie and used its looks to inspire a lot of American Capitols! 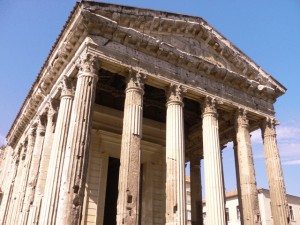 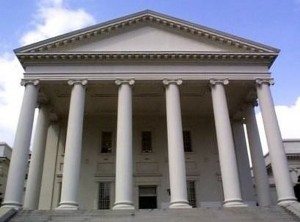 In the 1800’s the Temple became a museum and a library.

Want to see Vienne’s Roman Temple with my maman & me?