Do you know who the French President Macron’s alter ego from the past is?

I know I don’t usually do 2 written posts consecutively but I just had to share something with you, something that I realized only a few days ago and that astounded me! You probably know that on May 7th this year, the French people elected a new président de la république. You probably also know that this new président de la république is Emmanuel Macron. Although he doesn’t have a ton of experience since he only truly entered the political scene by working as François Hollande’s advisor in 2012, the French became used to seeing his face when he became ministre de l’économie et de l’industrie in 2014.

Here’s a short video of him speaking French with English subtitles so you can really picture him and work on your French at the same time. Note that the video is from his presidential days so this year.

Back to 2014 for a minute, which is when we started seeing him a lot. 2014 to 2017, only 3 years. Yet imagine seeing someone’s face for 3 years carrying this strange feeling that you already know him, that he is somehow very familiar, yet it can’t be because you don’t know him. It has been bugging me for 3 whole years. Until last week. I finally figured it out… feel free to call me slow!

I was cooking while listening to Boris Vian on my French Jazz channel when I told myself: “Nom d’une pipe mais c’est lui!”

So I ran to my computer to look at pictures of Boris Vian and… well… someone else had the same realization before me and created some pretty cool collages! Look!

Macron on the left – Vian on the right 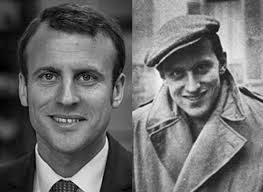 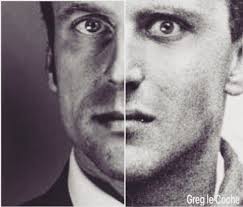 And now Vian on the left – Macron on the right 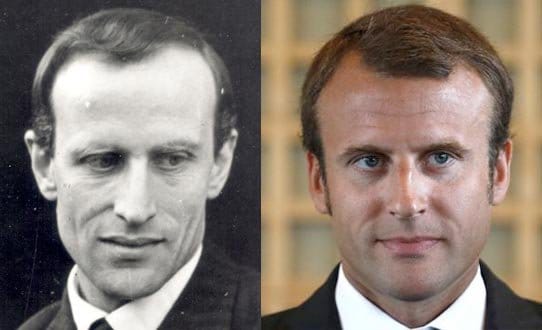 You don’t know who Boris Vian is? 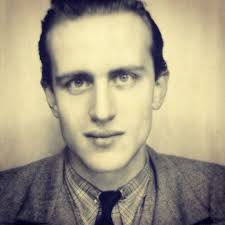 Oh but you have to! He was a wonderful original rebellious insolent French artist, an incredible talent capable of jumping around from branch to branch on the tree of art. Boris Vian was a poet and a writer, a jazz singer, musician, and critic, an actor, an inventor, an engineer, a free spirit that a lot considered beyond shocking back in his days. He was born in 1920. He died in 1959. He was only 39. 39 is also Macron’s age until December 2017. If 39 is an unusual age to die, it is also an even more unusual age to become the French president!

Too strange! I can’t stop thinking about it!

And now it is time to listen to Je bois, a jazz song by Boris Vian. But let’s do something different this time. Instead of giving you the French lyrics and the English translation as I usually do, I will simply let you listen and see how much you can understand by yourself. He sings fairly simple words fairly slowly and clearly pronounced.

On my next non video blog post, I will give you both the French lyrics and the English translation so you can measure your comprehension. You will, of course, have to tell me how you did.