I’m taking you to my French home region again: Lyon!

Today is December 8th. That is a big date for the Lyonnais (that’s what you call people who live in Lyon).

Why is today important? Something that happened in the 17th century, something that is still alive today, and more gigantically impressive year after year!

You’ve never seen it anywhere else and that’s why about 4 million people, that’s twice the amount of the Lyon population, flock to Lyon every December 8th.

Oh but what could it be??

Today it’s a virtual visit, in space and time, next spring is the real visit in Lyon that my French mother and I organize and guide. Click here to find out more.

Quick intro: Lyon is the 2nd biggest city in France. About 2 million inhabitants. It’s the home of the Beaujolais wine, its where the cinema was invented, it’s the capital of gastronomy & silk, and it’s the 2nd biggest center for the Renaissance, after Florence. 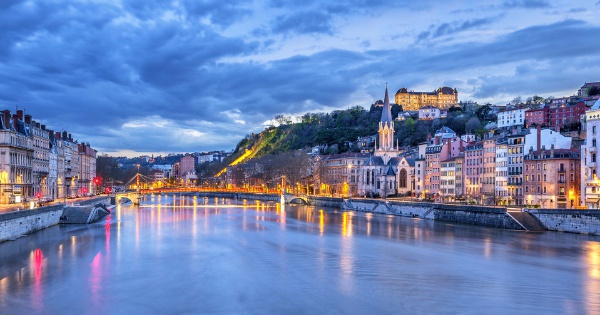 Now that you know a little more about Lyon, I can tell you all about le 8 décembre,  c’est le jour de la Fête des Lumières.

Once upon time, around the 12th century, there was a French city called Lyon filled with people who enjoyed a special relationship with la Vierge Marie, the virgin Mary. The Lyonnais believed the la Vierge Marie was watching over them and could protect them from the hardest moments of life.

So it’s only natural that when a devastating plague hit the south of France in 1643, the Lyonnais turned to Marie and begged her to stop the massacre. They promised her that if she accepted to help, they would honor her with a beautiful present. So when la peste, the plague, miraculously vanished, the Lyonnais organized a procession walking from la Cathédrale Saint Jean (foreground) to la Basilique Notre Dame de Fourvière (background). 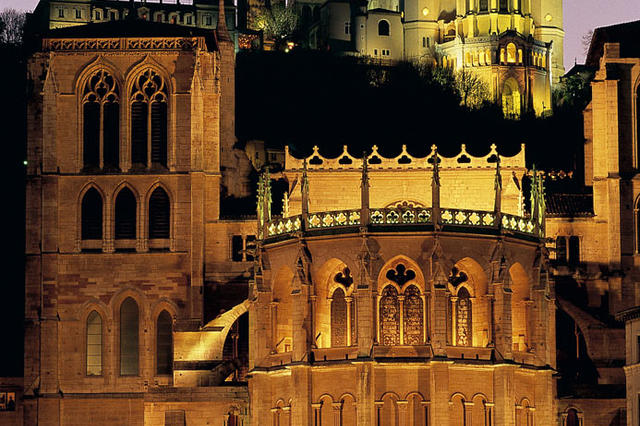 And every September 8th, every year, they would renew the thank you Mary festivities. Two centuries later, in 1852, the Lyonnais built Marie a golden statue. September 8th was logically going to be the inauguration date but, the rain decided otherwise. However, we didn’t want to pick any old date to replace September 8th. We wanted a meaningful date. That’s when December 8th was chosen. Pourquoi? Parce que, it is the day Catholics celebrate the Immaculée Conception.

The festivities have grown drastically since I was a little girl in France. In those days, we bought some lampions, short colored glasses, we also bought some tea lights to go inside the lampions to then position them outside all our windows. 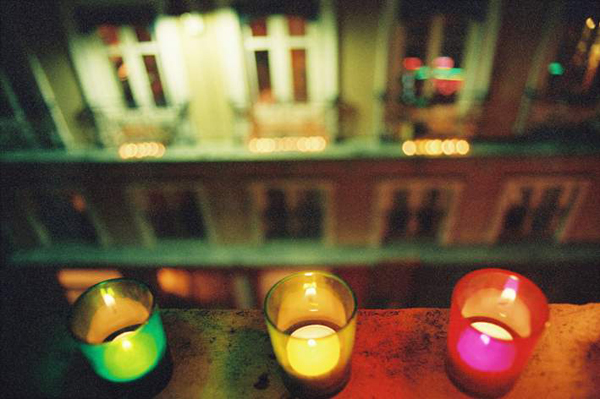 The result is shining blue, green, yellow, and red glasses outside every single window of every single house so from the outside it looks so pretty not to mention completely whimsical. Now remember this is only done in Lyon and its suburbs. Nowhere else in France.

Today, the same festivities happen! With a major addition. Let’s just say we got a little more fancy with our lights! 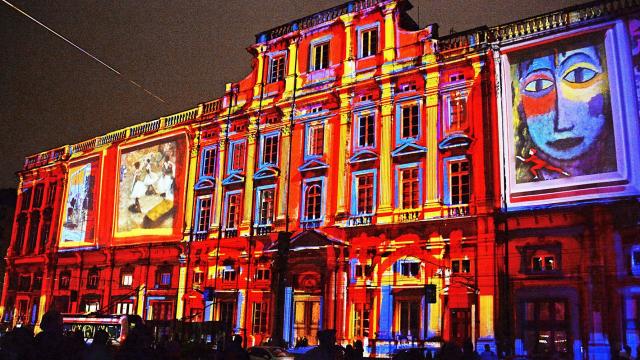 It is something that is so beautiful, so original, so different, so extravagant, so funny, that it is difficult for me to explain with words. Which is why I have added a link to an official 8 décembre video from the city itself so you can see. Get ready for a multicolored giant breathing moving operation all over Lyon. Remember 4 million people come to see it so you’d better watch that video, and then what you think in the comment!