Artist: Valerie Collymore – please scroll down to read her interview!

Modernism and impressionism are the results of the famous rebellious French nature! Did you know that until the second part of the 19th century, Art was very strictly controlled by the French State which dictated all the rules via Art Schools, teachers, training artists, Art exhibitions allowed but also by buying and selling Art. If you want to sell, then you have to follow the rules!

Some visionary and daring artists grew more and more fed up with the French State dictating what to paint: the scenes had to represent History, Mythology, or portraits. Artists were also told how to paint: no paint brush marks at all were to be noticed on the canvas!

These concepts and values came from the aristocratic world. But as society became less and less aristocratic and more and more bourgeois, the state’s monopoly was challenged. A new breed of art patrons was born and they wanted something more in tune with reality, something that could be understood with people without a classical education. 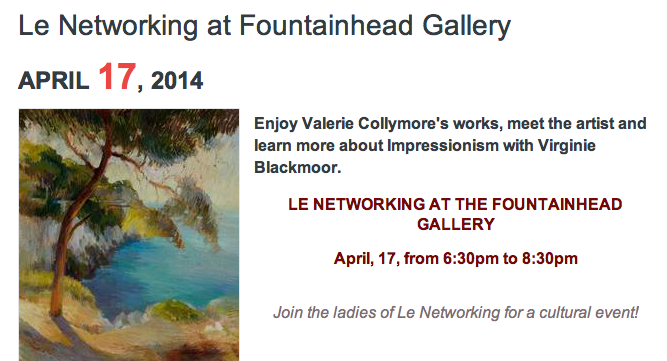 Here is what can be yours if you join us:

1- Superbe impressionist paintings, with the artist Valerie Collymore. Please read below for more info on Valerie.

2- Magnifique presentation exploring the birth of Impressionism in France. I will share lots of fascinating facts and stories with you so you will know why and how did it happened in 19th century France!

3- Fantastique group of francophiles gathering for “Le Networking”, a special event organized by the French American Chamber of Commerce.

And now meet the star of the show, the artist Valerie Collymore

Last october, I had the pleasure of meeting the wonderful artist and delightful woman Valerie Collymore. We were both attending the very popular “Le Networking” French networking event put on by the French American Chamber of Commerce.

Since then we have not only become friends but have come up with lots of fun business ideas together, joining our love of the French and our mission to spread it all around the Seattle area!

Valerie truly is an exceptional person! Her talent, curiosity, and generosity fascinate me and I have therefore decided to bring her to you via this interview. 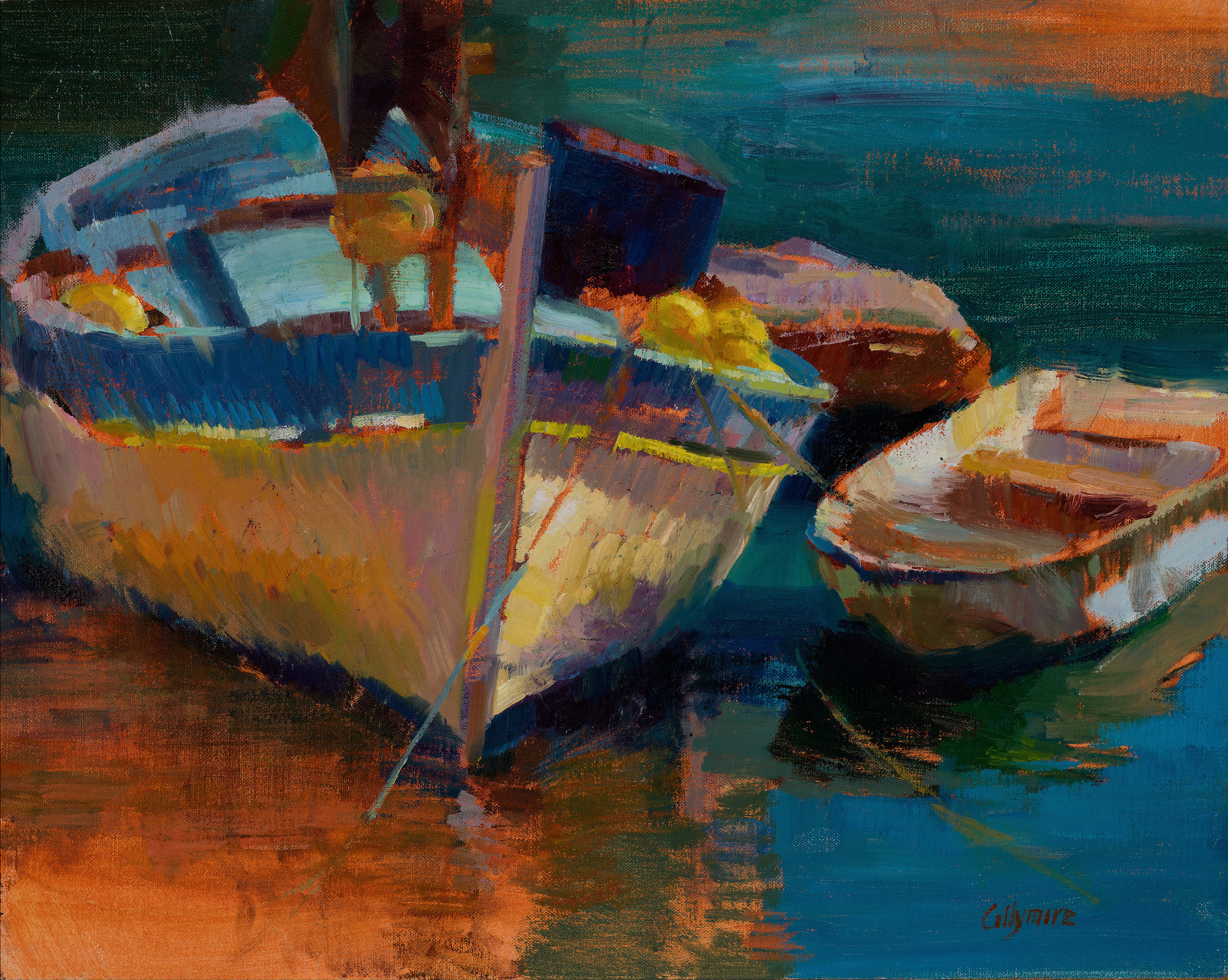 Virginie: What is your connection to France?

Valerie: My mother, a young widow at the age of 36, brought my brother and I to Europe during the late 1960s. Her intention was to visit as much of Western Europe as she could fit into a yearlong trip. She adored the adventure of travel and the unknown, and wanted her children to be exposed to many cultures, to the arts, to music, and to an excellent education during their formative years.

When the palm trees and azure sea views and mountaintop villages of the French Riviera came into view, my mother was completely enchanted, and quickly resolved to remain in Nice, France, then in Villefranche-sur-mer, rather than return to the turbulence of the 1960s era in the US.

Virginie: Tell us about your living experience in France?

Valerie: At the age of 9, and after 8 french lessons, my intrepid mother walked me to what she had learned was the best girl’s magnet school in town and dropped me off there, with the clear expectation that I should continue to get good grades, despite the (temporary ) language handicap. I thrived in the colorful culture of southern France and on those sun-drenched hills and beaches, and collected many lifelong friends, several languages and enduring memories and skills.

Virginie: What did you learn from it?

Valerie: Without a doubt, I learned about resilience, courage and self-reliance, from my mother and from my own experiences. I learned that people are all fairly similar and mostly want the same things for their loved ones and themselves. I learned to communicate with people from a wide range of backgrounds and cultures. I learned that there were few limits on what I could do and achieve, unless I placed the limits there myself.

Virginie: Why did you stay so connected to it? Do you go back often? For inspiration or…?

Valerie: I remain deeply connected to the beauty of the French Riviera and Provence, which is the “ country” of my youth. It is the place where I was educated, where I had the satisfaction of overcoming a language barrier to excel in academics, art, music and sports, where my talents were nurtured and encouraged, where I was petted ( literally, by passerby’s who at that time did not see many little girls of color ) and admired. It is a place that endlessly fed my intellect and my artistic esthetics, and where I felt at home. I just can’t stay away for long, and I go back yearly, to enjoy close friends – who are like family to me – that I have know since elementary school, middle school and high school. We all have long histories together and share cherished memories from splendid childhoods.

Matching sneakers – walking the back hills behind Nice, France, with my best friend from childhood, Jane Lepage and younger siblings Mary and George. Jane is actually coming for the first time to the USA on my birthday, this April 18! And stays through early May. She wants to see the show and visit the Northwest. Jane and I both became doctors. I chose to return to the USA for an Ivy League education rather then remain in France, as Jane did.

On another one of our frequent summer excursions, in southern France, in the hills above the residential district of Cimiez, Nice, where both of our families lived. We walked for 5-6 hours during a typical excursion, stopping to buy tomatoes and ham and water and cheese at a local market with our pocket money, and eating under the trees or on the beach.

Can you see the types of trees that I grew up around, and that make their way into my work, over and over again? During return yearly visits, I stay with one of the Lepages and also with another family that I am close to, as our mothers were best friends.

Virginie: If people ask you if you are French, what do you say?

Valerie: In France, during my childhood and teen years, it was usually assumed that I came from one of the French colonies, like Martinique. If it seemed important, I would reveal that was an American. At that time, being an American overseas was a good thing.

When in the USA, I am still culturally quite French on the inside, and have often been told that there is a “ certain something”, a “je ne said quoi” about me, that begs for an explanation. The “elevator speech” version of my upbringing usually satisfies this curiosity.

Virginie: How much of your work has been influenced by France?

Valerie: My work is very deeply influenced by my exposure to France and to French Impressionism.

My early artistic interests were very much encouraged at home and I had success in art within the french school system, through my graduation from an excellent french high school. As a matter of fact, my high school teacher refused to release my artwork to me, when I was leaving for the USA to study at american Ivy League universities.

I was dragged by my mother to every possible artistic venue and art museum in Western Europe during summer travel throughout my 9 years in Europe. I walked past the Matisse museum on my way to school for many years, and the Conservatory for concert piano studies that I attended was located across the street from the current Chagall Museum in Nice.

My mother became a second career artist while in France, and I helped carry her artwork and install it in various venues, including the Casino of Monte Carlo. A few american artists visited the Riviera specifically to paint, and my generous and kind mother would drive them to wonderful locations where french impressionists such as Renoir, or Cezanne, or Bonnard, or Monet actually painted. The artists painted while my brother and I and the visiting kids ran around Renoir’s historic property playing tag and war. Eventually, as I got older, I joined the artists who were painting, producing small gouache landscapes.

I formed a deep attraction to French Impressionism early in life and a true passion for this art form 30 years later, when, after a career in medicine and having raised a family, I decided to become a full time career artist. After a 30 year absence from any art production, I embraced an art career fully, beginning in 2010.

I am currently working on unlocking the “secrets” of french impressionism, and hope to share the current state of this exploration in my upcoming solo exhibition.

Virginie: hen and how did you discover your artistic gift?

Valerie: I was the kid that was always drawing, and later painting with gouache. My mother always told me that I had the ability and intellect to do anything that I wanted, and she expected good outcomes from me. During my education in France, I was pretty consistently singled out as having artistic talent.

I am very much carrying on the artistic torch, in her honor, and this show is dedicated to my amazing and intrepid mother, who passed away 4 years ago.

Did I manage to convince you Seattle people it was going to be a magical event? I hope so! See you there!